Many years ago I dreamt of a reptile, a komodo dragon like creature. The following day while walking through a mall I stopped dead in my tracks when I saw a sculpture of that very animal in my dream. Back then the experience blew my mind.

Eerie coincidences like this are usually memmorable and because we ascribe mystical properties to dreams we tend to invest them with meaning (hidden or otherwise). The fact is, however, our innumeracy of probability theory has gotten the better of us. Coincidences, however uncanny, are to be expected and how often or how much we should expect them can be derived with precision.

Take the simplest example: coin tosses. We know that sometimes we get a run of 2, 3, 5, and even more, of heads or tails. Nothing particularly extraordinary about that. But what about getting 100 tails or heads in a row? Assuming the coin is fair/unbiased wouldn't that take a miracle? Let's find out. 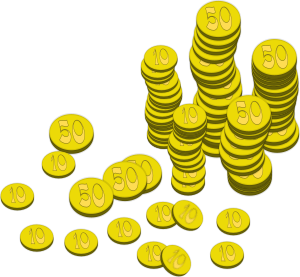 Let's begin at the beginning. How many times do we have to flip a coin to achieve a 50% chance of getting at least one heads (yes, Virginia, that's spelled with an s)? The probability of getting heads on a coin toss is 50% so we need only toss it once.

Let:
x = number of heads in a row we're interested in
p = chances/probability of getting x heads in a row at least once
f = coin flips necessary to achieve p

Actually f isn't really the exact number of flips we need to achieve p, as we saw above in the ten heads example. There's an initial setup where we need to flip the coin x - 1 times. So in the case of a run of ten heads we said we had to flip the coin 9 times. And then on the tenth flip (that's when f = 1) we can begin computing for the probability of having x heads in a row.

As we've seen above:

Solving for f we obtain:

Let's take that formula out for a test run and see what we get.

Instead of p = 50%, let's see how many times we need to toss a coin when p = 99.9% --very close to near certainty of getting x heads in a row at least once. Applying the same equations we obtain the following values.

So getting a run of 100 heads is quite possible. And getting 1000 in a row is theoretically achievable--if we can flip coins fast enough before the universe runs out of gas. Perhaps someone's already doing a simulation on a computer.

Instead of an experiment with an initial x-1 flips and then adding one new toss and getting the probability of the last x tosses, we can do one set of x number of coin flips, and then do another set of x flips, and then another set, and so on. In such a case f is the number of sets of x flips and therefore the total number of actual coin flips is (f)(x). Example: for x = 10 and f = 7000, F = 7000 (10) = 70,000. The equation for f remains the same. We just end up with a larger number of coin tosses.